Trump, the religious right has laid bare its hypocrisy

Trump, the religious right has laid bare its hypocrisy 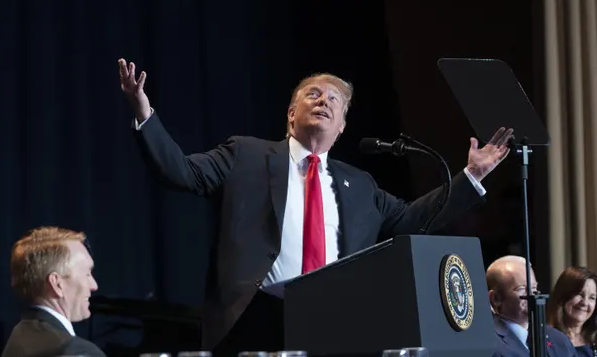 he yearly time misplacement known as the National Prayer Breakfast pulled in its standard cluster of pastorate, military, and political pioneers in Washington on 7 February. Most conspicuous of all, obviously, was Donald Trump, who utilized the accepted lectern to call for prohibiting premature birth, among different positions dear to the Religious Right.

However the presidential remark that most encapsulated every one of that has run ethically haywire with the as far as anyone knows moral lion's share came when Trump commended the "abrogation of social liberties". You can think about that announcement a guiltless, if humiliating, misreading of the Teleprompter. Or then again you can hear it as a Freudian slip.

As motivated by the Reverend Billy Graham and started by President Dwight Eisenhower in 1953, the National Prayer Breakfast served two consensual, practically anodyne purposes. It typified the moderate, mid-century common religion that lectured that an American was a superior resident for putting stock in God and going, in any event once in a while, to chapel or synagogue. Also, in the midst of the Cold War, American pioneers relentlessly depicted their country's aggregate confidence going up against what was routinely called "pagan Communism".

Truth be told, the best use of religion in the open square amid the 1960s happened in quest for a liberal objective: social liberties. Like the abolitionists of the nineteenth century, social liberties pioneers, for example, the Reverend Dr Martin Luther King Jr employed the Bible and its idea of all humankind being shaped in the heavenly picture as a contention for racial uniformity.


Eisenhower and King and the renditions of American religion they exemplified look like interesting relics now. The National Prayer Breakfast, with Trump lecturing his bigoted choir, bears witness to the denigration of zealous Christianity as anything aside from a negative political development. No measure of bipartisan window-dressing – Democratic representative Chris Coons as a co-patron of the current year's occasion, House Speaker Nancy Pelosi was in participation – can fix the harm that the religious right has done to itself.

It is not really vital here to repeat the horde sins that Trump has transparently dedicated or the gay obliviousness of sacred writing he double-crossed amid the presidential crusade. The only thing that is important is that over 80% of white evangelicals advantageously overlooked their earlier worry with presidential character to vote in favor of Trump, and this group has remained his most steadfast base.

As far as it matters for him, as we probably am aware, Trump has conveyed the merchandise: two enemy of premature birth judges selected to the preeminent court, a prohibition on transgender individuals in the military, expulsion of an expense code arrangement that banned religious establishments from expressly underwriting political hopefuls.

So as to square the specific hover of how a sequential miscreant, club head honcho, and universally handy biased person can be meriting their help, devout Christians have created a fresh out of the box new religious work-around. It depictsTrump as the current King Cyrus, the agnostic ruler of antiquated Persia who enabled the Jewish hostages of Babylon to come back to their heavenly land.

From the point of view of Democrats and progressives, the secure outreaching fortification around Trump can resemble an issue. As demonstrated appointive activists and alliance voters, evangelicals apply lopsided power. Unquestionably, they will ensure that any Republican-essential challenger to Trump is vanquished. What's more, in another nearby broad decision, they hold enormous balloting power in such swing states as Georgia, Florida, North Carolina, Iowa, and Michigan.

Rather, however, Americans of the middle and left should feel freed by the eligious right's grip of Trump. It has broken a spell.

Such that common or less-perceptive individuals are hesitant to concede, they regularly feel deficient to the assignment of belligerence governmental issues, considerably less religion, with fundamentalists. Maybe a couple of us know the applicable writings or philosophies, and regardless of whether we do, we default to the defective reason that religion shouldn't be a piece of political basic leadership. (Which would have come as a stun to King, for one.)

Under King Cyrus Trump, be that as it may, the religious right has uncovered its bad faith, and without a doubt its blasphemy. We can feel encouraged to battle our rivals like some other political development as opposed to as dedicated devotees whose immediate line to the Almighty, and whose subsequent assumption of good predominance, we have no chance to get of experimentally discrediting.
In time, maybe, white evangelicals will recuperate a portion of their moral and religious moorings. A more youthful age of such evangelicals is advancing through secondary school and school now, and enrolling its nauseate with Trumpian Christianity, even at Jerry Falwell Jr's Liberty University.

Among the more seasoned age, no less than a couple of devotees of guideline, for example, previous George W Bush staff members Michael Gerson and Peter Wehner, have persuasively censured the zealous development's self-perpetrated wounds.

Until some bigger scale time of repentance desires white evangelicals, anybody acquainted with Judeo-Christian history may offer an elective antecedent to Trump than King Cyrus. My own designation would be a seventeenth century Turkish Jew named Shabbetai Zevi, who articulated himself the Messiah.

For some resulting years, there were Jews who really trusted him, so extraordinary was their hopelessness at oppression and dispersal. At that point, suddenly, their savior changed over to Islam. At the point when researchers today glance back at Shabbetai Zevi, they evaluate him most altruistically as a crazy person, and less liberally, as a fake.