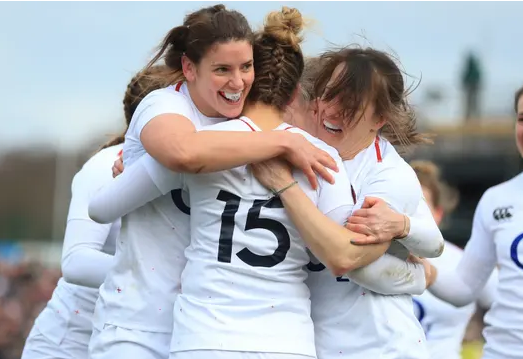 Britain's ladies show up convictions for a great pummel after just two recreations. A savage showcase by their advances and some sharp wrapping up by their backs pulverized the Six Nations champions in Doncaster.

This should be a genuine test for Simon Middleton's side. It was over by the interim by which time England had scored four of their seven attempts.

Katy Daley-Mclean hauled the strings behind a predominant England scrum, the fly-half's first change following 10 minutes helping her pass the milestone of 500 global focuses. France aroused after the interim with four attempts to put a sparkle on an out of the blue substantial thrashing

Britain realized they needed to coordinate the ground-breaking French pack at the set piece and the early signs were great when a Red Rose scrum drove advances and Sarah McKenna hoped to have scored a brilliant attempt. Britain, however, were punished at the scrum, Poppy Leitch declared by the TMO to have hindered.

Britain had brought back the Harlequins lock Abbie Scott, who captained them against the United States in the pre-winter, to include additional power. Scott was soon at the core of a driving hammer that allowed Daley-Mclean the chance to demonstrate her dissemination abilities with a perfectly weighted kick that gave Jess Breach the opportunity of the principal attempt. The fly-half passed her achievement with the change.

The full-back McKenna was then simply held up over the French line after Vickii Cornborough had crushed French bodies off the beaten path with an amazing convey into the guests' 22. Poppy Cleall, however, before long jumped over the line for England's second attempt after the left-wing, Kelly Smith, had been handled barely shy of the line.

Britain's skipper, Sarah Hunter, was showing others how its done in a genuine trial of her group's physical characteristics, one pounding tackle on the France focus Gabrielle Vernier snuffing out a risky assault. Cornborough's immense hit on the France skipper, Gaëlle Hermet, pursued however it was made a decision to be high and the prop was appeared yellow card.

France endeavored to exploit their one-player advantage yet their renowned driving hammer was snuffed out by the English pack, giving Hunter's group a gigantic lift. Britain turned the ball over and Cleall allowed Emily Scarratt to demonstrate her expertise and vision with a kick downfield that bobbed under the control of Smith. Britain were 19 points clear and French heads dropped.

With the last move of the primary a large portion of the England advances flooded afresh, McKenna continued with a weaving run and Breach went over again to verify an attempt reward point.

France had the capacity to exploit the additional player soon after the break when Safi N'Diaye at last broke the English resistance. It was a short reprieve, however, with Cleall before long plunging over close to the posts for her second attempt.

Pauline Bourdon, the France scrum-half, at that point, is truly snappy and she motored over underneath the posts for an attempt she changed over herself. Daley-Mclean seemed to have counterbalanced that score however she spilled the ball over the tryline. It scarcely made a difference with the substitution prop Hannah Botterman rolled over close to a similar spot for the 6th attempt and France were before long cleared away by the white tide with Cath O'Donnell battering her way finished.

Bourdon scored her second attempt and Romane Ménager's score in the last move of the try them some reassurance with an attempt reward point. Britain had vindicated the one-point rout at Grenoble the previous spring, a switch that has been destroying them from that point onward. It would appear to be nothing can stop them taking France's terrific pummel crown now.