Tech Story 10:00 AM
Avengers: Endgame Box Office Collection Day 1 India: The film's opening is at par with This highest grosser 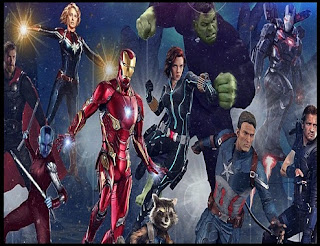 Marvel’s Avengers: Endgame has blown past expectations to register the second biggest opening day figures at the Indian box office. The film has made Rs 53 crore on day one, pushing it past Thugs of Hindostan.

The Avengers assembled for the last time on the big screen and they're smashing box office records globally like never before. Avengers: Endgamereleased in India on April 26 to tumultuous reviews and it reportedly managed a whooping Rs. 50 crore plus opening day collection, reported Box Office India.

"The collections are the third highest ever in terms of Nett collection after Baahubali: The Conclusion and 2.0," the report stated. However, the film's final numbers are yet to be disclosed. The film opened across 2,845 theatres.

The advance sales of Avengers: Endgame had exceeded 2.5 million and some cinemas are also running around-the-clock screenings.

The figures make Endgame the second highest opener in India, after Baahubali: The Conclusion and Thugs of Hindostan.

Avengers: Endgame, the 22nd film in the Marvel Cinematic Universe, has created history at the Indian box-office. The Hollywood superhero flick, directed by Joe and Anthony Russo, has collected Rs 53.10 crore on Day 1 to emerge the biggest opener of 2019.

In terms of opening-day collection, it has surpassed the last year’s Thugs of Hindostan, the top Hindi opener ever. The Aamir Khan and Amitabh Bachchan-starrer had earned Rs 52.25 crore on its first day.

Meanwhile, an AFP reported stated that Avengers: Endgameshattered records upon its release in Asia, specifically in China. The movie raked in $169 million on Wednesday, its first day of release in 25 markets including China, Australia and several countries in Europe. Endgame set single-day box office records in China, Australia, New Zealand and other countries.
This makes Endgame the highest opening of 2019, of any Hollywood film in India, and the second highest opening of any film in Indian box office history. Worth noting is that the film opened on more than 2000 screens fewer than Thugs.
Avengers: Endgame is the 22nd superhero film of the Marvel Cinematic Universe and it is the direct follow-up to Avengers: Infinity War. In Endgame, Marvel superheroes come to terms with their defeat in Infinity War and gear up for a bigger battle against Thanos.
Avengers: Infinity War, meanwhile, had opened to Rs 31 crore in 2018, and is the highest grossing Hollywood film in India.
What is startling about the success of Avengers: Endgame is that it released on just 2845 screens across India and yet managed to rake in a huge number on Day 1.
Avengers: Endgame opened to fabulous reviews on Friday. "For fans of the most successful franchise in movie history, Avengers: Endgame delivers the world - and more. Endgame is a neatly orchestrated, smartly packaged and powerfully rendered culmination to a series that has a committed fan base among those that have grown up on it." He gave the film four stars out of five.
With almost 80-85% occupancy, Avengers Endgame surpassed opening day occupancy records for Baahubali 2, boxofficeindia said in another report. Baahubali 2 collected around Rs 335 crore nett (all languages) in its first weekend.
“In all probability, the film will be in top three grossers in India,” trade analyst Girish Johar earlier told HT. Starring Aamir Khan, Amitabh Bachchan, Katrina Kaif and Fatima Sana Shaikh in lead roles, Thugs of Hindostan collected Rs 52.25 crore while Prabhas-starrer Baahubali 2 earned Rs 121 crore on day one of the release.
Endgame had a grand opening worldwide with a record Rs 1,186. In two days, the film has made Rs 2,130 crore worldwide, Deadline reported.

The Marvel film has become the fastest movie to make $100 million - it took 17 hours to cross the mark while Disney’s Stars Wars: The Force Awakens took 21 hours to achieve the feat.
Industry estimates are already calling Endgame at the highest single day and opening day record of all-time with $140 million-$150 million, it added.
Avengers: Endgame has been called a fitting finale to the Marvel films. India Today critic Lakshana Palat gave it a rating of 5 out of 5 stars and wrote, "Avengers: Endgame delivers on the super-sized expectations with class, a generous dose of Marvel-style humour, a bucketload of emotion and of course, edge-of-the-seat action."
"It is Marvel's talent and brilliant skill to be able to sprinkle humour in the darkest of situations. The most compelling part about Avengers: Endgame is that it makes you refresh your memory about the other 21 films.

It reminds you about the other little pieces that make this a grand and Marvel-ous spectacle," the review added.
The three-hour film starring Robert Downey Jr., Chris Hemsworth, Chris Evans, Jeremy Renner, Mark Ruffalo and Scarlett Johansson is the final chapter in a story told across 22 Marvel films.

It picks up after last year’s Avengers: Infinity War, when many of Marvel’s big-screen superheroes appeared to turn to dust. In Endgame, the survivors plot to kill the supervillain Thanos and undo his damage.
The word of mouth for the film is unbelievably flattering, which is encouraging even the non-fans to watch it.
Avengers: Endgame opened in China two days ahead of its India premiere. In the East Asian country, too, the film is wreaking havoc at the ticket windows.
Movie critic and trade analyst Taran Adarsh, in his Saturday tweet, noted that Avengers: Endgame was a non-holiday release and that it was an eye-opener for an industry that feels national holidays/festivals yield best results at the box-office. He also shared the first-day collection of Avengers: Endgame in the same post.
Avengers Endgame earned $ 107.5 million at the China box office, taking the total first day haul to 169 million dollars from 25 markets. It earned a record $60 million at the US and Canadian box offices during its Thursday night debut, distributor Walt Disney Co said.
Global ticket sales for the film about Iron Man, Hulk and other popular characters reached $305 million for the first two days, Disney said. Trade experts expect the film will cross $ 900 million in the opening weekend, and it will likely need just a couple more days to top the 1 billion mark.
Endgame released in 2845 screens across India and the advance booking of tickets for the film in India recorded sale of over 2 million, tickets as per a release by BookMyShow.

Avengers: Endgame had phenomenal pre-release buzz surrounding its release across the world and India was no exception. Over 25 lakh tickets of the Marvel biggie were sold in advance bookings in India, which is a record. In some parts of the country, viewers shelled out over Rs 2000 for a ticket, which speaks volumes about the excitement among cinephiles.