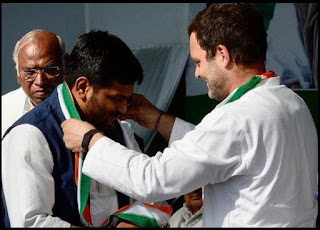 "Hardik will join Congress on March 12 when Rahul Gandhi will be in Gujarat. Hardik will be inducted into the party at a rally in Ahmedabad. PAAS gave its permission to Hardik to join the party today," core committee member Geeta Patel said.

The announcement came after the Samiti's core committee meeting in Rajkot. Hardik Patel is the convenor of PAAS.
Hardik Patel, who is facing sedition charges and currently out on bail, had announced he would fight the coming Lok Sabha election from Gujarat.

"Hardik may fight the election from Amreli, Mehsana or Jamnagar seat. However, nothing has been finalised yet. Since he will be joining the Congress, it is the party that will take a final call about the seat," Geeta Patel said.

Congress has announced that Gandhi and other senior leaders will be in Ahmedabad on March 12 for the Congress Working Committee (CWC) meeting and a public rally.

Mr Patel, 25, had last week made his intention to contest Lok Sabha elections from Gujarat's Jamnagar constituency. The Jamnagar Lok Sabha seat is currently represented by Poonamben Maadam of the BJP.
The CWC meeting, which was earlier scheduled to take place on Feb 28, had been postponed in the wake of the IAF air strike in Pakistan's Balakot.

"Mahatma Gandhi started Dandi March this day and said he (Mahatma Gandhi) will overthrow the British. I am joining the same Congress party which, in the past, has been led by Subhash Chandra Bose, Pandit Nehru, Sardar Patel, Indira Gandhi, Rajiv Gandhi, the people who worked to strengthen our country," Hardik Patel said.
Hardik Patel had come into limelight for leading strident protests in Gujarat over his community's demand to get reservation in education and jobs.

Patidar leader Hardik Patel, who shot to fame by spearheading a quota stir in Gujarat, today joined the Congress in the presence of Rahul Gandhi during the party's Working Committee meet in Ahmedabad.

Patidar quota agitation leader Hardik Patel has said that he will join the Congress on March 12. He said he would contest the upcoming Lok Sabha elections on the party's ticket from Gujarat's Jamnagar constituency.