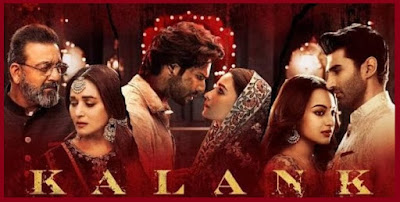 Abhishek Varman's Kalank was one of the most-awaited releases of the year. In fact the movie opened with a bang and became the highest grosser of 2019. However all of this soon faded away with day two and day three Box Office collections.
Alia Bhatt, Varun Dhawan, Aditya Roy Kapur, Sonakshi Sinha, Madhuri Dixit Nene and Sanjay Dutt starrer 'Kalank ' took a huge dip on day two. From Rs. 21.60 crore, the movie managed to collect Rs. 11.45 crore, which is a drop of approximately 50% from the day one collections.
The movie, which was a mid-week release, had the potential to mint more money on Friday, considering it was Hanuman Jayanti and Good Friday. However Karan Johar's production movie Kalank failed to do that. It only went steady with the collections of day two, which in itself was a huge drop from day one.
Kalank which could have crossed Rs. 50 crore mark by now, minted Rs. 11.60 crore on Friday and could not even touch Rs. 45 crore mark. The movie definitely needs to pick up over the weekends in order to come close to the budget of the film. For the uninitiated, the movie is made on a massive budget of Rs. 150 crore.
According to trade analyst Taran Adarsh, Kalank is working well in multiplexes as compared to single screens, which is where the mass audiences go to watch a film. Commenting about the collections of the movie, he tweeted, Kalank sees minimal growth on Day 3 GoodFriday holiday Big jump is clearly missing Plexes better, mass circuits ordinary/weak... Now dependent on Sat and Sun to add to the total... Wed 21.60 cr, Thu 11.45 cr, Fri 11.60 cr. Total 44.65 cr. India biz.
On the brighter side, despite the low collections, Kalank has gained a spot as the fourth highest opening weekend movie of 2019, after Total Dhamaal, Kesari and Gully Boy. The movie, if it survives for another week, will face tough competition from the much-awaited Hollywood flick