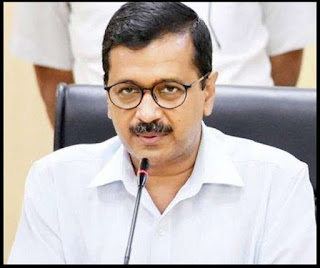 
Aam Aadmi Party chief Arvind Kejriwal on Tuesday alleged that there have been several instances of faulty electronic voting machines in Goa during polling for the third phase of Lok Sabha elections.

Election authorities in Goa Tuesday ordered an inquiry into a complaint filed by the BJP that Delhi Chief Minister Arvind Kejriwal violated the model code of conduct by inciting religious sentiments.

Tagging a news report which claimed that “faulty EVM in a booth at Kizhakke Nalpathu near Cherthala was replaced after it was found that all votes were getting registered to BJP”, Kejriwal said, “Absolutely shocking. All faulty EVMs deliver votes to BJP”.In the third phase of elections, about 18.56 crore voters are eligible for voting  for which 2.10 lakh polling booths/stations have been set up.

In another instance, he shared party’s Goa convenor Elvis Gomes’ tweet, “Election of shame? Mock poll with 9 votes for each of 6 candidates in booth no 31 in 34 AC in Goa.

Are these really faulty or programmed in this fashion?” He shared another tweet of a citizen who alleged that “in Kerala, if you press ‘Hand’ symbol, light shows as ‘Lotus’.

How is that all ‘faulty EVMs’ select only BJP?” to which Kejriwal said “another faulty EVM voting for BJP”.

Besides all seats in Gujarat (26) and Kerala (20), voting will be held in four seats in Assam, five in Bihar, seven in Chhattisgarh, 14 each in Karnataka and Maharashtra, six in Odisha, 10 in Uttar Pradesh, five in West Bengal, two in Goa, and one each in Dadra and Nagar Haveli, Daman and Diu and Tripura.

Kejriwal, star campaigner of the Aam Aadmi Party (AAP), had addressed a campaign rally at Margao on April 13.

Kejriwal tried to spread fear among Christians and Muslims by remarking that they "will be driven into the sea" after being declared infiltrators, Prabhu said.


A senior official said the District Election Officer of South Goa had been asked to "verify the allegations and take appropriate action".