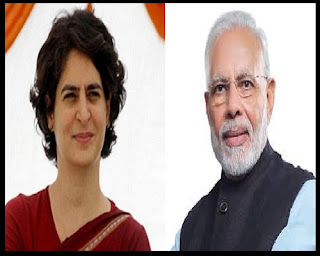 Congress party has fielded Ajay Rai against Prime Minister Narendra Modi from Varanasi. It was being speculated that the grand old party could field Priyanka Gandhi Vadra from the high profile constituency.

The Congress on Thursday fielded local leader Ajay Rai from Varanasi in Uttar Pradesh, ending weeks of speculation that  Priyanka Gandhi Vadra could contest from the seat against Prime Minister Narendra Modi.

Congress has once again fielded Ajay Rai as its candidate from the Varanasi Lok Sabha constituency to take on Prime Minister Narendra Modi, who is seeking re-election.


On the other hand, the party has fielded Madhusudan Tiwari against Bhojpuri actor Ravi Kishan from Gorakhpur. Priyanka had said that she will be happy to contest the election if asked by her party.

Ajay Rai had forfeited his deposit in the 2014 Lok Sabha polls and finished third in the contest.

This is the second time Congress has chosen Ajay Rai as its candidate for the Varanasi Lok Sabha seat. In 2014, he was Congress's bet for the temple town from where PM Modi was contesting his first ever Lok Sabha election.

Modi defeated Ajay Rai with a record number of votes. Aam Aadmi Party (AAP) convenor Arvind Kejriwal, too, contested the elections from Varanasi in 2014 and was defeated.


PM Modi won the seat with over 3 lakh votes.
Priyanka had earlier said that she will be happy to contest from Varanasi if asked by her brother and Congress president Rahul Gandhi.


The Congress had fielded Rai against Modi in 2014 as well. He finished third in the contest, after Modi and Aam Aadmi Party's Arvind Kejriwal.


Last week, in response to a question on whether he planned to field his sister against PM Modi, party chief Rahul Gandi


had said, "I will leave you in suspense. Suspense is not always a bad thing." Priyanka herself triggered speculation that she might contest from the temple town when, in response to a question

last month if she will make her electoral debut from her  Sonia's constituency Rae Bareli, she quipped "why not Varanasi?"

Taking a dig at Priyanka after the announcement, BJP leader GVL Narasimha Rao claimed she "chickened out" of the contest after toying with the idea.

A Varanasi strongman who enjoys a significant clout in the alleys of the holy city, Ajay Rai is a five-time MLA who has tried his hands in the Lok Sabha election as well, but with no success.

Ajay Rai had previously been a member of the Bharatiya Janata Party (BJP) and Samajwadi Party (SP) before joining the Congress. He has also contested the assembly elections as an Independent candidate from Varanasi.
In this uphill task of defeating Narendra Modi, Congress is once again banking on a grassroots man who has a strong Varanasi connect.
Ajay Rai started his political journey as BJP's student's wing leader and managed to establish himself as a giant killer when he defeated a nine-time MLA in 1996 from the Kolasla seat.
He quit the party in 2009 after BJP fielded Murli Manohar Joshi from the Varanasi Lok Sabha seat.

In 2015, Rai was arrested for causing violence and arson in Varanasi during a ban on idol immersion in Ganga.

In 2017, he lost Uttar Pradesh state elections from Pindra as a Congress candidate.The Congress hopes Ajay Rai, a Bhumihar, can at least make a dent in PM Modi's votes.