-->
Home BollyWood Priyanka back in Mumbai

Priyanka back in Mumbai

Why is Priyanka back in Mumbai? 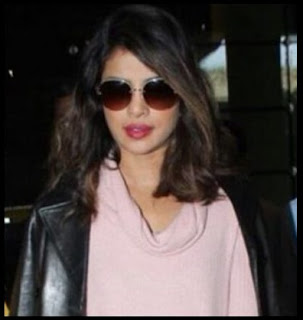 
On Friday, Priyanka Chopra posted a family photo on Instagram. In the photo, she is seen dining with her mother Madhu Chopra, brother Sidharth and other family members.


Priyanka Chopra is in Mumbai to attend her younger brother Siddharth Chopra's wedding.and the actress is having a whale of a time

Priyanka Chopra is in Mumbai and the actor is making the most of her stay. The actor has, reportedly, flown down to India to attend the wedding festivities of her younger brother Sidharth Chopra.

Siddharth and Ishitaa Kumar will wed this weekend, followed by a reception on April 30.
Priyanka is pretty much active on her social media and never shies away from sharing pictures and stories on her Instagram handle.
The actress is definitely enjoying the typical punjabi family gathering! Meanwhile, on the work front, Priyanka will next be seen in 'The Sky is Pink' also starring Farhan Akhtar.
Siddharth and Ishita had their roka ceremony in February.
On Friday, PeeCee posted a family photo on Instagram. In the photo, she is seen dining with her mother Madhu Chopra, brother Sidharth and other family members. Sharing the photo, she wrote, “Mumbai diaries.. #family
Priyanka dined with her mum Madhu Chopra and Sidharth on Thursday evening. Her cousin actress Mannara Chopra can also be seen in the picture.
As always Priyanka’s fans in India went gaga as she stepped out for the dinner outing. A video of the actor from inside the restaurant was shared on several fan pages.
In the video, Priyanka seems to be busy on her phone. Several other photos of PeeCee were also posted on social media.
Priyanka Chopra Jonas is in Mumbai and she is lapping in all the love and family time she can get before she jets off back to her hectic work schedules in the US.
The actress who is with the Chopra clan had shared some pictures with sister Parineeti Chopra yesterday (April 25) and introduced her new furry family member to the world – Bailey
Cousin Parineeti Chopra, who couldn't attend the dinner, met Priyanka earlier and also introduced us to the new Chopra family member.
The Chopra family has reason to rejoice, with Siddharth Chopra's wedding around the corner.
Priyanka Chopra has flown down to Mumbai to be a part of her brother's big day and is spending some quality time with her family.
Last night, he took to her Instagram account to share a sneak-peek of her dinner date with her family.
Apart from her brother and mother Madhu Chopra, her cousin and actress Mannara Chopra can also be seen in the picture. However, Nick Jonas is missing from the celebrations.
On Wednesday night, PeeCee was spotted having fun with her sister Parineeti Chopraat her residence in Juhu.
They both had shared lots of fun pictures and boomerang videos of them on their social media handles.
The Chopra sisters had also introduced a new member of their family to their fans who was none other than their adorable pet dog Bailey Chopra.
Just like her other pet, Diana, Priyanka Chopra also hinted that Bailey might also have an official Instagram account.
'Meet Bailey Chopra!' Pari posted, 'And like in any other Punjabi family I (his aunt) named him! Hahaha'.
Meanwhile, PeeCee also shared the digital cover of the magazine Billboard that features the Jonas Brothers, Nick, Joe and Kevin.
However, her hubby dearest Nick Jonas didn't accompany her this time to Mumbai.
The actress was spotted at the airport this week. The actress looked stylish in her all-yellow outfit.
Keeping the style game on and her traditional values alive flaunting her elegant mangalsutra, PeeCee completed her look with a pair of hoop earrings,minimal make-up with a dash of pink on her lips.
The actress also wore a watch and a sunglass She was seen donning a parrot green knee-length dress which she paired with same coloured heels. With hair open, she accessorised her look with a dark green purse.
Nick's father Paul Kevin Jonas Sr, who could not make it, sent his love. "Love to our family," he commented.

Priyanka Chopra, was recently given the title of ‘Beauty of the Year’ by People magazine. The actor reacted to her bagging the same and said that she has realised that looks are not everything.

She told the publication, “I think I realised what all it takes to actually look the way we do on magazine covers and the work we do.

That’s when I realised looks aren’t everything, it’s the confidence with which you walk into a room, it’s the ability to do your job to the best of your capabilities”.

Priyanka and Nick Jonas exchanged rings on December 2 and 3, 2018 in two ceremonies – Christian and Hindu.

Post their marriage, rumours were doing the rounds that the couple is filing a divorce but it turned out to be false. Priyanka and Nick are happily married and are head over heels for each other.

On the professional front, Priyanka recently released her Hollywood film Isn’t it Romantic and will soon be releasing her next Bollywood film The Sky is Pink where she will be seen with Farhan Akhtar and Zaira Wasim.


The whole team of the movie has packed up shooting for the the film and it'll be going for the final edits soon. She was last seen in her hubby Nick Jonas’ music video Sucker along with other Jonas family members.
Priyanka Chopra Jonas is back in the bay and hopefully for a long while this time. The actress, who is otherwise busy globe-trotting with hubby Nick Jonas, arrived in the Maximum city recently and we know great things are meant to happen.

Well, at least some great scripts will get their share of reading. While we are still at that, Earlier, the crew had wrapped up shoot schedules in Mumbai, London and New Delhi and had headed to the amazing Andaman Islands to complete the film.

While that is that, one can't ignore the fact the Priyanka looked like a million bucks in green dress and matching sandals. Check it out here.

The Sky Is Pink is bankrolled by Ronnie Screwvala's RSVP and Siddharth Roy Kapur's Roy Kapur Films. It is based on the true-life story of the young motivational speaker Aisha Chaudhary and her parents.

It marks Priyanka's much-awaited comeback to Bollywood after her appearance in a leading role in ABC's Quantico. She is also a co-producer on the film which is slated to release mid-2019.

Besides this, Priyanka is also working on her next Hollywood venture, which will be based on the life of spiritual guru, Maa Sheela Anand. The actress will be producing this movie, which will be helmed by Oscar-winning filmmaker Barry Levinson.

There is another SLB dream project that might just come to fruition. Earlier it was reported that the director has registered the title Gangubai with the Indian Motion Pictures Producers Association (IMPPA) after rumours were abuzz that Priyanka would play female gangster Gangubai Kothewali, who was also known as the Madame of Kamathipura. An insider was quoted saying, "Bhansali would not just register a title for the sake of it.

The script has been with him for a while and he may well get PC to do that film. Sometimes the media does put two and two together to figure out if Salman and PC are in the same film — a chance they missed out recently on Bharat. So, in all probability PC will be Gangubai." So, here's hoping.