Rahul Gandhi Says Will Apologise To Top Court For Misquoting It 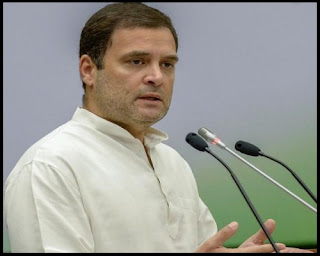 Rahul Gandhi Says Will Apologise To Top Court For Misquoting It

he Supreme The court, while hearing the contempt proceedings against Gandhi asked him where is his complete regret and what does expressing regret "in brackets" mean.

The Congress chief was trying to justify the comment aimed at Prime Minister Narendra Modi. Asking him to admit his mistake, the Supreme Court added that he was contradicting himself in his affidavit.

As Gandhi agreed to file a fresh affidavit, expressing apology, the Supreme Court told him to keep his political stand to himself.Congress president Rahul Gandhi, who was under fire from the Supreme Court for attributing the ‘Chowkidar Chor Hai’ jibe to it, apologised to the court on Tuesday.

Congress chief Rahul Gandhi will apologise through a fresh affidavit for wrongly attributing the "Chowkidar chor hai" remark to the Supreme Court, his lawyer told the judges today. The BJP had objected to the Congress chief's earlier affidavit expressing regret, saying it does not contain an unqualified apology.

Abhishek Manu Singhvi, who was representing the Congress chief, said it was his mistake that the affidavit did not contain the word "apology" and a fresh one would be filed.
Supreme Court was hearing a petition against Rahul Gandhi's chowkidar chor hai remark, which he attributed to the court and said that the SC had proved that PM Modi was guilty of corruption in the Rafale case.
"I have checked the dictionary, regret means apology.  But I will say apology," Mr Singhvi told the court.
CJI Ranjan Gogoi, who was hearing the case on Tuesday, asked Rahul Gandhi's lawyers, "Where have we said all that? How can you attribute it to us? Where have you expressed complete regret? Why the second affidavit?"
CJI Gogoi then went on to ask, "What is the meaning of expression of regret in brackets?" "We heard all. After extensive hearing, Singhvi wants to file additional affidavit. It is open for the respondent to file affidavit. The acceptance of any such affidavit will be considered on Monday," said the judges.
Rahul Gandhi's counsel, Abhishek Manu Singhvi said on behalf of the Congress leader, "I have expressed regret. That is the same as an apology. There cannot be any doubt on my statement."
Gandhi added, "There are errors in the affidavit and for these three errors I apologize. There was no intention to insinuate anything to the SC."
Rahul Gandhi was trying to reason that the word regret in his affidavit is as good as an apology.
However, CJI Gogoi was not pleased. He said, "We have great difficulty in understanding what you are saying."
Submitting his affidavit in response to the criminal contempt petition moved by Bharatiya Janata Party (BJP) MP Meenakshi Lekhi in the top court, Gandhi accepted that the words were never used by the court and his attribution came in the heat of the moment when he was campaigning in Amethi.

BJP MP Meenakshi Lekhi, who filed contempt petition against Gandhi, said that it is the grossest kind of contempt.
The CJI bench has given Rahul Gandhi to file an additional affidavit in the case and added that the grant of time shouldn't be accepted as an apology.