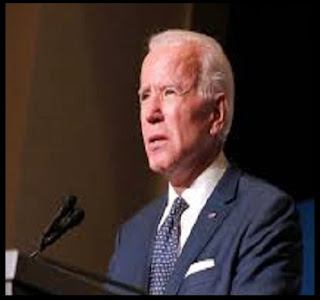 Former US Vice President Joe Biden announced Thursday betting that his working-class appeal and ties to Barack Obama’s presidency will help him overcome questions about his place in today’s increasingly liberal Democratic Party.

he is entering the 2020 White House race, joining an already crowded list of candidates running on the Democratic Party platform.

He made his announcement in a video posted on Twitter.“Everything that has made America America is at stake.

That’s why today I’m announcing my candidacy for president of the United States,” the 76-year-old Biden said in the 3½-minute video.
Biden said he couldn't stand idly by while US President Donald Trump "fundamentally altered the character of this nation".
"The core values of this nation. our standing in the world. our very democracy. everything that has made America - America - is at stake," he wrote in the post.

"That's why today I'm announcing my candidacy for President of the United States."

Even before his official announcement, Biden, who served eight years as Barack Obama's vice president, led most surveys of Democratic voters.
The RealClearPolitics poll aggregate puts him as favourite with 29.3% support, followed by independent Senator Bernie Sanders at 23%.
In a video announcement, Mr Biden warned that the "core values of the nation... our very democracy, everything that has made America America, is at stake".
Biden’s first major campaign event is set for Monday in Pittsburgh, where he is expected to speak about rebuilding an inclusive middle class.
Biden will then launch a multistate campaign tour with a focus on states with early voting, where he will hash out his vision for closing the divides that are driving Americans apart.
The 76-year-old enters a crowded race for the 2020 Democratic nomination.
Thursday’s announcement marks the unofficial end of the chaotic early phase of the 2020 presidential season.
The field now features at least 20 Democrats jockeying for the chance to take on President Donald Trump next year. Several lesser-known candidates may still join the race.
He is up against 19 other hopefuls, including Senators Elizabeth Warren, Kamala Harris, and Bernie Sanders.
Despite being widely viewed as an instant frontrunner in the race, Biden faces tough questions about whether his candidacy will be viable amid the crowded and diverse field of candidates.
A statement Monday morning praising Biden was sent by an Obama spokesperson: “President Obama has long said that selecting Joe Biden as his running mate in 2008 was one of the best decisions he ever made.
He relied on the Vice President’s knowledge, insight, and judgment throughout both campaigns and the entire presidency.
The two forged a special bond over the last 10 years and remain close today.”In his announcement, Mr Biden recalled President Donald Trump's much-criticised remark that there were "very fine people on both sides" of the deadly Charlottesville white nationalist riots of 2017.
"With those words, the president of the united states assigned a moral equivalence between those spreading hate and those with the courage to stand against it," Mr Biden said.
"I believe history will look back on four years of this president and all he embraces as an aberrant moment in time.

But if we give Donald Trump eight years in the White House, he will forever and fundamentally alter the character of this nation, who we are, and I cannot stand by and watch that happen."
Biden’s decision to run came despite accusations in March and April by several women that he touched them in ways that made them feel uncomfortable.

In early April, Biden promised in a two-minute video to be “more mindful and respectful of people’s personal space.”

Despite entering the race later than most of the field, Biden has consistently led polls of Democratic primary voters ahead of Sens.

Bernie Sanders and Kamala Harris, and South Bend, Indiana, Mayor Pete Buttigieg. This is Biden’s third run for the White House.
Mr Biden is the most experienced of the Democratic candidates. A six-term senator, ran twice unsuccessfully for president - in 1988 and 2008 - and later served as President Barack Obama's deputy for two terms.
He was tipped to run again in 2016, the year Mr Trump was elected, but ruled himself out after the death of his 46-year-old son, Beau Biden, from a brain tumour.
Mr Biden is also betting on having the strongest appeal of the Democratic candidates across America's Midwest, where many low-income voters have abandoned the party in recent years in favour of Mr Trump.
“Joe Biden has been running for president and losing since the ’80s. 2020 won’t be any different. Biden’s fingerprints are all over foreign policy blunders and the weakest economic recovery since World War II,”  don’t need eight more years of Biden. Just ask President Obama, who isn’t even endorsing his right-hand man.”
Biden’s announcement ends more than two years of speculation about whether he would launch a White House bid for the 2020 election, dating to President Donald Trump’s victory over former Secretary of State Hillary Clinton in November 2016.
Biden’s decision not to run for president in the 2016 contest helped clear the way for Clinton to become the Democratic nominee.

In fact, if he had entered the 2016 fray, Biden would have started off as the most popular candidate.

With a resume boasting 36 years in the Senate representing Delaware and eight more in Obama’s White House, Biden’s status as an experienced Washington insider serves as just one of many contrasts with Trump.

Trump did not immediately respond to the announcement video, in which Biden attacked the president for his remark that there were “very fine people on both sides” of a white nationalist rally and counterprotest in Charlottesville, Va., in 2017.

Even before Biden announced his 2020 run, he led early polls of Democratic presidential candidates. His national name recognition and association with Obama, who enjoys high popularity as a White House alumnus, made him a top contender from the earliest stages of the campaign.