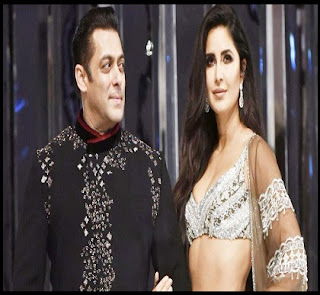 Chashni song from Bharat out: Do not miss Salman Khan and Katrina Kaif's love ballad

The new romantic song Chashni from Salman Khan and Katrina Kaif starrer Bharat is finally out. Check out Salman and Katrina's sizzling chemistry.

The love ballad shows an electrifying chemistry between Salman Khan and Katrina Kaif. Bharat is set to hit the screens this Eid.


Director Ali Abbas Zafar beams, “Chashni celebrates the sweetness of love in the simplest manner. The song is set in 1970s has Salman Khan romancing Katrina Kaif in the deserts of the Middle East over rangolis and jalebis.. We've shot in Abu Dhabi and Malta.

It basically takes the story of Bharat forward. Salman's character experiences a more mature sort of love with Madam-Sir, played by Katrina. It's the soul of 'Bharat’s music.”

Salman Khan and Katrina Kaif’s Bharat is one of the much-anticipated films of the year. The movie also starring Disha Patani, Nora Fatehi and Sunil Grover among others will release this Eid and has been directed by Sultan director Ali Abbas Zafar.

The makers of the film had released the first trailer in April and it received an exceptional response from the moviegoers on social media.

Talking about the term Madam-Sir, which has piqued everyone’s interest, the filmmaker lets in, “Madam-Sir is a common way of addressing a senior woman officer in Delhi. It’s a common word that you hear in government offices even today.

That’s where it came from and was used to address Kumud Raina (Katrina's character) in the film.”

The song has been sung by Abhijeet Srivastava and written by Irshad Kamil, Chashni song from Bharat sees the hottest onscreen couple of the film industry.

The love ballad brings out the sweetness in their chemistry effortlessly and one can’t wait to witness a lot more of them on the big screen soon. Don’t they look stunning together? Recently, Ali Abbas Zafar in an exclusive interview spoke about Salman and Katrina’s pairing.

He said, “I realised that I cannot write love scenes between the two (Salman and Katrina) of them because even when Salman sees Katrina for the first time in the film, you automatically feel that they are made for each other. So, the task is to keep it very real and subtle.

To make it as normal as possible. They both are really good looking stars and I was coming straight from Tiger where they play husband and wife and then to bring them back and write the scene where they meet for the first time in Bharat and fall in love is a process but somewhere because of the story it comes out as very natural and sweet.”
The film, which traces the journey of a man and a nation spanning six decades, with references to the pages of history and landmark events, marks Ali’s third collaboration with Salman and Katrina. It also stars Disha, Tabu, Sunil Grover and Jackie Shroff in key roles.

After their 2017 film Tiger Zinda Hai, Salman Khan and Katrina Kaif are reuniting with Ali Abbas Zafar for Bharat. And their fans are excited to see this hit on-screen jodi once again on the big screen.

Talking about her chemistry with Salman Khan, Katrina Kaif said in an interview to Mumbai Mirror, "Yes, Salman and I share great chemistry, but when I walked onto this set, I was very clear that the script demanded a different kind of dynamics between us and I had to maintain it."

Bharat is an official remake of a Korean film An Ode To My Father. It depicts the history of India through the life of an ordinary man.

Talking about working with Salman in the film, Katrina said in an interview, “I feel the audience expects a lot from Salman and me as an on-screen jodi. We have received so much love and support from fans that we have that much more responsibility to deliver a good film. Nowadays, the tolerance for anything less than perfect is so little.”

Just recently the trailer of Salman Khan and Katrina Kaif’s Bharat was unveiled and fans couldn’t contain their excitement. It’s for the first time that Salman Khan will be seen in six different avatars in the film.

The superstar will be seen romancing Disha Patani and Katrina Kaif in the film. Film’s first song, Slow Motion is already topping the charts and now the makers have dropped the teaser of film’s second song titled, Chashni.

In the song’s teaser, Salman and Katrina can be seen sharing some sizzling chemistry. A romantic number, Chashni features the two stars as lovers.

In the song, Bhaijaan Khan is seen looking handsome in a black ethnic kurta and a black shirt. Katrina, on the other hand, can be seen donning three different traditional looks.