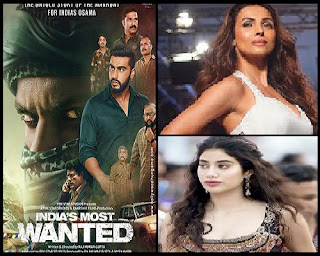 India’s Most Wanted trailer: Arjun Kapoor is on the lookout for India’s Osama

Kapoor is returning to the big screen with Raj Kumar Gupta's India's Most Wanted, and Malaika Arora and Janhvi Kapoor cannot stop cheering for him.

It's India's Most Wanted trailer day, and Arjun Kapoor has found his two cheerleaders in girlfriend Malaika Arora and half-sister Janhvi Kapoor.

It is no secret that Arjun Kapoor is gearing up for the release of his upcoming film India's Most Wanted. And as soon as the actor shared a new poster ahead of the trailer release, Malaika and Janhvi were the first ones to re-share the same on their Instagram stories

After his last debacle, Namastey England, Arjun Kapoor is returning to the big screen with Raj Kumar Gupta's India's Most Wanted. And Janhvi and Malaika are constantly cheering for the actor on social media.

Last month, when Arjun Kapoor dropped the first poster of India's Most Wanted, Janhvi Kapoor was among the first ones to laud the actor. The Dhadak actress took to Instagram to praise the poster of Arjun's film.

After sharing India's Most Wanted poster on her Instagram story, Janhvi also said, "The poster was literally too cool to ruin with text and emojis!!! So excited for this one!!!

If Janhvi praised the poster, girlfriend Malaika Arora couldn't stop drooling over the "awesome" teaser of India's Most Wanted.

Directed by Raj Kumar Gupta, India's Most Wanted is an action thriller. It revolves around 5 unsung heroes who go on a manhunt for India's Osama.

Talking about the experience of working in India's Most Wanted, Arjun had earlier said, "Some journeys are special because of the team and the effort that the people put in to fulfil a vision.

As my 12th film India's Most Wanted wraps today, all I can say is Raj Kumar Gupta, it's been an honour and a privilege to work with you and your team, to tell a story that needed to be told and to play one of the many unsung heroes we have in our country."

Starring Arjun Kapoor in the lead role, the trailer of India’s Most Wanted is out. The trailer shows that the story revolves around five men who go on an undercover mission to catch the most wanted man in India, dubbed as India’s Osama.

From what we learn in the trailer, the men are trying to catch a dreaded terrorist, without any guns and back-up to rely on. They face strong opposition from bureaucrats and also have to outsmart Pakistani intelligence agencies.

We see that the five men, led by Arjun Kapoor, travel to different cities in India and their search comes to an end in Kathmandu.

While the trailer is high on patriotism with some strong dialogues, the audience has seen many similar films in the recent past so it is yet to be seen if this film offers anything different in the genre.

Directed by Raj Kumar Gupta, the film is based on real-life events that occurred between 2007-2013. Raj Kumar Gupta is known for helming films like Raid, No One Killed Jessica and Aamir.

He has also written the Arjun Kapoor starrer India’s Most Wanted. The film also stars Rajesh Sharma in a key role.

The music of India’s Most Wanted has been composed by Amit Trivedi with lyrics by Amitabh Bhattacharya.

Arjun Kapoor was last seen in 2018’s Namaste England which failed to leave a mark. This year, Arjun will also be seen in Ashutosh Gowariker’s period drama Panipat alongside Kriti Sanon and Sanjay Dutt. He will also star in Dibakar Banerjee’s Sandeep Aur Pinky Faraar alongside Parineeti Chopra.

Talking about Arjun Kapoor's film, India's Most Wanted - it is a film inspired by a secret manhunt that was conducted between 2012 and 2014 to capture one of the country's most dreaded terrorists. The makers of the film did a thorough research of three years to make this film.

As soon as the trailer of Arjun Kapoor's film, India's Most Wanted, released online and the actor shared it on Instagram, Malaika Arora reacted to it with applause emojis

Arjun's last film 'Namaste England' had failed to work at the box office. Last month, when Arjun unveiled the first poster of 'India's Most Wanted', Janhvi was among the first ones to praise the actor. She took to Instagram to praise the poster of Arjun's film.

On Thursday, May 2, the makers of the Arjun Kapoor-starrer India's Most Wanted released the trailer online. The actor, too, took to his Instagram account to share the trailer and also went live through the medium. The live post received applause from his rumoured girlfriend, Malaika Arora. She dropped a comment, which had three clap emoticons.

It's nice to see how supportive Malaika is of rumoured beau Arjun Kapoor.

Before the release of Arjun's film's trailer, Malaika had also taken to her Instagram story to announce its release date.

She had shared the film's poster on her social media account. Not just Malaika, Arjun, too, keeps commenting on her post with a 'hmm'. Looks like both of them have some secret code words behind the word 'hmm' as both - Malaika and Arjun often leave that word on each other's posts.