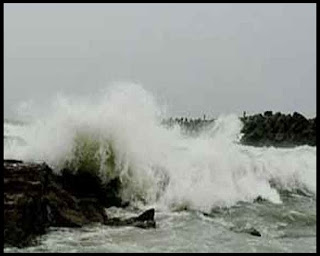 With the extremely severe cyclonic storm Fani inching closure towards the Odisha coast, the state government has intensified its precautionary measures to deal with any situation.

At least 19 districts of Odisha, Andhra Pradesh and West Bengal, besides Kolkata are likely to be affected by "extremely severe" cyclonic storm "Fani", which is approaching India's eastern coast and is likely to hit south of Puri on Friday.


Odisha government intensifies precautionary measures to deal with cyclone Fani Officials have been assigned to supervise relief, rehabilitation and restoration work in districts likely to be affected.

The government has directed to close all educational institutions from Thursday till further order
with the extremely severe cyclonic storm Fani inching closure towards the Odisha coast, the state government has intensified its precautionary measures to deal with any situation.

The government has assigned 11 IAS officers to supervise the relief, rehabilitation and restoration work in the districts that are likely to be affected by the cyclone.

Collectors in the all coastal and adjoining districts of Gajapati, Nayagarh, Khordha, Cuttack, Jajpur, Dhenkanal, Keonjhar and Mayurbhanj have been advised to identify all vulnerable people living in kutcha houses or living near the coast or in low lying areas.

They have been instructed to start the evacuation of all those living in such areas near the coast from Wednesday and complete the process by Thursday afternoon.

The vulnerable people will be shifted to multipurpose cyclone/flood shelters and other safe shelters.
Arrangements have already been made for free kitchen, safe drinking water, lighting, health and sanitation facilities at the shelters.

Around 900 cyclone shelters have been made ready to house evacuees while troops of the Indian Navy, Indian Coast Guard and 78 teams of the National Disaster response Force (NDRF) have been requisitioned for deployment.

The evacuees and it has requested for two helicopters to be stationed in the state for emergency food distribution. The cabinet secretary directed the Ministry of Defence to meet the requirements of the Odisha government.


The National Crisis Management Committee (NCMC), the country's top body to handle an emergency situation, on Wednesday reviewed the preparedness for "Fani", which is likely to hit south of Puri in Odisha on Friday, a home ministry official said


All 28 teams of National Disaster Response Force (NDRF), 20 Odisha Disaster Rapid Action Force (ODRAF) units and other Fire Services units are being dispatched to areas on a priority basis.

While the government has directed to close all educational institutions from Thursday till further order, it has cancelled leaves of various departments.

The government has cancelled leaves and holidays for all the officials in the Energy Department as part of preparedness in view of the possible damage in power supply and distribution during the cyclone.

All kinds of leaves of doctors and health staffs have been cancelled up to May 15. The Health Department has asked that all those who are on leave must report back to respective headquarters by Wednesday evening.

The Navy and the Coast Guard have deployed ships and helicopters for relief-and-rescue operations while the Army and Air Force units in the three states have also been put on standby, an official statement said

The NDRF has deployed 12 teams in Andhra Pradesh, 28 in Odisha and six teams in West Bengal. Additionally, 32 teams are kept on standby. The teams are equipped with boats, tree cutters, telecom equipment etc. One NDRF team consists of 45 personnel.

The SRC also advised the tourists to leave Puri by the evening of May 2 and non-essential travel must be cancelled during Friday, Saturday to the likely affected districts.

District Emergency Operation Centres and control rooms of other offices have been activated and functioning round the clock.

According to the Indian Meteorological Department (IMD), the cyclonic storm 'FANI' in Bay of Bengal lay centred at 0530 hrs IST on May 1, about 680 km south-southwest of Puri and 430 km south-southeast of Vishakhapatnam.

At a meeting chaired by Cabinet Secretary P K Sinha and attended by the representatives of the state and central ministries and the agencies concerned, the India Meteorological Department (IMD) informed that "Fani" was expected to touch the Odisha coast, south of Puri, on Friday afternoon with wind speeds ranging up to 180 km per hour, causing heavy rainfall in the coastal districts.

It is very likely to intensify further and cross Odisha coast between Gopalpur and Chandbali, to the south of Puri around May 3 afternoon with maximum sustained wind speed 175-185 kmph gusting to 205 kmph.

The IMD conveyed to the NCMC that the storm may surge about 1.5 metres in height and may inundate the low-lying coastal areas of Ganjam, Khurda, Puri and Jagatsinghpur districts of Odisha at the time of landfall.

The storm is likely to impact the coastal districts of Odisha, including Ganjam, Gajapati, Khurda, Puri, Jagatsinghpur, Kendrapada, Bhadrak, Jajpur and Balasore. In West Bengal, it will affect East and West Medinipur, South and North 24 Parganas, Howrah, Hooghly, Jhargram districts and Kolkata and in Andhra Pradesh, Srikakulam, Vijayanagram and Visakhapatnam districts.

Reviewing the preparedness of the state and central agencies, the cabinet secretary directed that all necessary measures be taken to complete the evacuation of people from the areas in the cyclone path and to maintain adequate quantities of essential supplies such as food, drinking water, medicines etc.

The railways, civil aviation and shipping ministries were advised to review their preparedness well in time and ensure quick resumption of services in the event of any disruption.

The chief secretaries and principal secretaries of the Andhra Pradesh, Odisha and West Bengal governments participated in the NCMC meeting through video-conference.Senior officers from the ministries of home, shipping, civil aviation, railways, fisheries, power, telecommunications, defence, drinking water and sanitation, food processing, health, besides those of the IMD, NDMA and NDRF also attended the meeting.

How Cyclone Fani got its name and what it means

The name for this cyclone was picked up from a pool containing 64 names suggested by eight countries in the North Indian Ocean basin. Fani was suggested by Bangladesh.

Tamil Nadu, Andhra Pradesh and other states with their coastlines hugging the Bay of Bengal are bracing up for Cyclone Fani to make a landfall. Cyclone Fani (pronounced as Foni) is gaining strength over southeast Bay of Bengal and will soon develop into an "extremely severe cyclonic" storm.

The name for this cyclone was suggested by Bangladesh. The World Meteorological Organisation (WMO) has devised a mechanism where countries submit a list of names from time to time. Names of cyclones are chosen from this pool.

At present, all eight countries have submitted eight names each for naming future cyclones. The name Fani was chosen from this list containing 64 names.

Last year Cyclone Titli hit Andhra Pradesh and parts of Odisha. This cyclone was named by Pakistan. In 2017, Cyclone Ockhi caused severe damage in Kerala and parts of Tamil Nadu. Its name was given by Bangladesh.

The names given by India are: Agni, Akash, Bijli, Jal, Lehar, Megh, Sagar and Vayu.