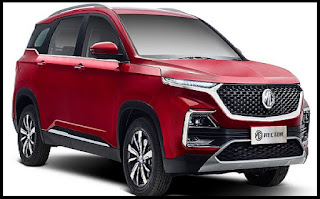 MG Hector Bookings Begin: Here's How You Can Book the SUV


MG Motor India has begun accepting bookings for the Hector SUV on an official basis, starting today, for an amount of Rs 50,000.


Customers interested in booking Hector, which is SAIC owned MG's first product for India, can do so by visiting the automakers India website or by visiting one of the 120 Morris Garages' dealerships across India.

The automaker has also noted that it will increase the number of its dealerships to 250 by September this year.

MG Hector, which is based on SAIC's Baojun 530 SUV, was unveiled globally last month. MG is pitching it as India's first internet car and the SUV gets a vertically mounted 10.4-inch touchscreen with iSmart interface to offer a large number of connectivity features.

A handful of the brand’s dealers had begun accepting bookings for the Hector a few days ago, as reported by us earlier. Prices for the SUV are expected to be announced later this month.

The system also features a voice assist feature that allows passengers to perform a wide variety of actions, including adjusting the air conditioning and even opening and closing the sunroof, using voice commands.

The company had earlier confirmed that, from today, prospective customers will be able to check out the Hector SUV and proceed with bookings at around 120 MG brand outlets spread across 50 cities.

The compact SUV, which will rival the likes of Tata Harrier and Jeep Compass, is available in two engine options; a 1.5-litre petrol unit and a 2.0-litre diesel engine.

The petrol engine churns 141.03 bhp and 250 Nm of torque, and also gets an option of hybrid drivetrain with a 48-volt lithium-ion battery. This configuration, noted MG, offers 20 Nm of additional torque.

However, a ground level check reveals some dealer outlets will be operational by next week and are in final stages of completion. MG Motor India is aiming to have around 250 touch points ready by September this year.

The diesel engine is the one that powers the Jeep Compass as well as the Tata Harrier. On the Hector, this engine makes 167.67 bhp and 350 Nm of peak torque.

Both the engines will be available in combination with a six-speed manual transmission while the petrol engine will also come coupled with a dual clutch automatic transmission.

Engine options for the MG Hector include a 143hp, 1.5-litre turbo-petrol; a 170hp, 2.0-litre diesel; and a 48V mild-hybrid version of the 1.5 turbo-petrol. The SUV will be sold with a five-seat configuration, initially, and the company has exclusively confirmed to us that the seven-seat Hector will hit the markets next year.

MG Hector is one of the most anticipated cars for this year as it marks MG's revival in India. It is expected to launch by the end of this month, and is likely to be priced in the ₹15 lakh - ₹20 lakh range.

Key rivals to the Hector SUV include the likes of the Mahindra XUV500, Jeep Compass and the Tata Harrier. The model comes with a long list of segment-first features, including a 10.4-inch portrait-oriented touchscreen infotainment system with a number of connectivity technologies, a panoramic sunroof, six airbags, and 17-inch alloy wheels, among others. The company is likely to price the SUV in the Rs 15-20 lakh range.

Apart from the Hector, MG Motor will also launch the eZS electric SUV in India later this year. Additionally, as reported by us, the company will also launch the Maxus SUV next year, which will take on the likes of the Toyota Fortuner and the Ford Endeavour in our market.

The system has been developed in collaboration with several technological partners like Cisco, Unlimit, and Microsoft among others. The iSmart connectivity system comes with advanced technology, smart application, built-in Apps, Artificial Intelligence (AI), Smart Features, Voice Assist, and Infotainment.

The command centre of the system is a vertically-mounted 10.4-inch ultra large Full-HD infotainment display that comes with pre-loaded entertainment content and allows you to manage complete vehicle settings.

MG says that the display screen can withstand the high temperatures of Indian weather conditions. For full-time connectivity, the system also comes with a first machine to machine embedded sim, along with the SUV Internet Protocol version 6 makes it 5G-ready, making it future-proof. The system offers features like - Real-Time Navigation, Remote Location, Geo-Fencing, Emergency Response and much more.

One of the key features and most important features offered in the MG Hector is its voice command system. Powered by China's conversational AI provider Nuance, the system is designed to use voice commands to access multiple in-car functions like close or opening sunroof, control climate control, navigations and more. In fact, the system can even understand the Indian accent to make it suitable for the Indian market.

Like Google Assistance, the Voice Assist system can be accessed by saying 'Hello MG' and is capable of handling over 100 functions.

The Hector also comes with an eCall emergency response system that sends an emergency alert to MG's customer management centre, called Pulse Hub and any registered phones, in the case of an accident. Also, in the event of the airbags being deployed, the system triggers a series of emergency response actions.

The iSMART Next Gen is supported by the iSMART mobile App. MG iSMART App is feature-rich like none other in the Indian market.

The car gets scanned each time the App is opened, and information includes location of car, tyre pressure, or if the doors are locked or not. Owner can use the remote app to directly lock or unlock doors, turn on ignition and switch on the air-conditioner.