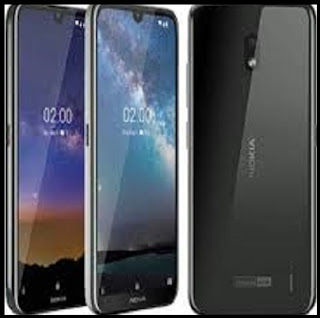 Nokia 2.2 has purportedly surfaced on the Web just hours ahead of the HMD Global event in India

The new Nokia phone appears to sport a waterdrop-style display notch and come with Google's Android One branding - the look does appear to match the teasers HMD Global has been posting.The Nokia 2.2, codenamed Nokia Wasp, was spotted on the US FCC site previously

After the introductory price, Nokia 2.2 will be available at Rs 7,699 and Rs 8,699 for the 2GB and 3GB variants respectively. The phone will go on sale in India via Flipkart, nokia.com and retail outlets starting June 11, 2019.

As per the render, the Nokia phone has a waterdrop-style display notch design along with thin bezels. There is also Android One branding visible at the back.

This suggests that the new Nokia handset would debut with vanilla Android Pie experience out-of-the-box and would be eligible for receiving future Android updates.

HMD Global has also partnered with Reliance Jio to bundle an instant cashback of INR 2,200 along with 100 GB additional data.

Cashback and additional data offer will be applicable on recharges of Rs 198 and Rs 299. Instant cashback of INR 2,200 will be credited in the form of 44 discount coupons of Rs 50 each, in the MyJio App of an eligible Jio subscriber.

Nokia 2.2 will be available in Steel and Tungsten Black colour options.

Nokia 2.2 sports 13-megapixel camera on the back and 5-megapixel front facing camera. On the software front, it offers Android Pie out-of-the-box. Nokia 2.2 is also part of Android One programme which ensures up to two years of OS upgrade and three years of monthly security upgrades.

The back of the surfaced Nokia phone also has a single camera sensor -- accompanied by an LED flash. There is also a Nokia logo on top of the glass-like glossy panel.

Nokia 2.2 is an upcoming smartphone by Nokia. The phone is rumoured to come with a 5.71-inch touchscreen display and an aspect ratio of 19:9.

Nokia 2.2 is expected to be powered by a 2GHz quad-core MediaTek Helio A22 processor that features 4 cores clocked at 2.0 MHz and come with 2GB of RAM.

Nokia 2.2 based on Android Pie and packs 16GB of inbuilt storage that can be expanded via microSD card (up to 400GB). The Nokia 2.2 tipped to be a dual-SIM smartphone that will accept Nano-SIM and Nano-SIM cards.

The Nokia 2.2 is rumoured to run Android Pie and is expected to be powered by a 3,000mAh battery.

As far as the cameras are concerned, the Nokia 2.2 is rumoured to pack a 13-megapixel camera with an f/2.2 aperture and a pixel size of 1.12-micron. It is expected to sport a 5-megapixel camera on the front for selfies.
Sensors on the phone are rumoured to include accelerometer, ambient light sensor, and proximity sensor. The Nokia 2.2 supports face unlock.